I tentatively went to the first WITA Meet event at Mansions Of The Future a while ago, despite the fact that I, along with other artists in Lincoln, refuse to apply for studio space there, because of their diktat that we must give four hours' time at the space every week, with no indication that that time would be remunerated in a living wage, it's asked for voluntarily. And I can't volunteer one second of my time while I still have a massive gas bill that needs paying.

There I spoke to the very lovely Lesley Farrell, with whom I did my last ever voluntary work with after finished University at the Collection working with John Newling for The Noah Laboratory back in 2009.
Lesley spoke about her work for this exhibition at Gunby Hall, about the Lincolnshire feminist and suffragette Emily Massingberd.

I'm off on my summer hols atm, so I decided a day out to go and see the exhibition would be good. 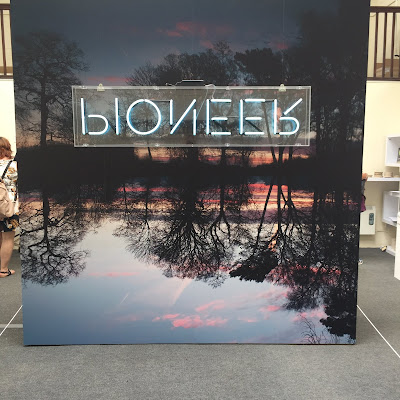 Emily Massingberd was a teetotal feminist, who often dressed in men's clothing, as many suffragettes at the time did n the fight for equality. In her honour, there were some "mocktails" created.
With the 1980s neon, I later thought that if I were commissioned to work with this, I'd get footage of Tom Cruise in Cocktail and rotoscope myself all over him. 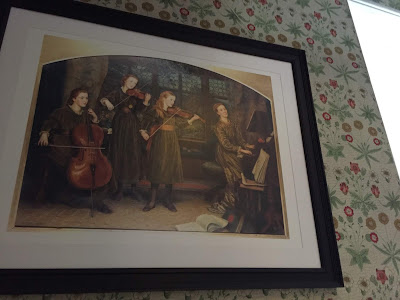 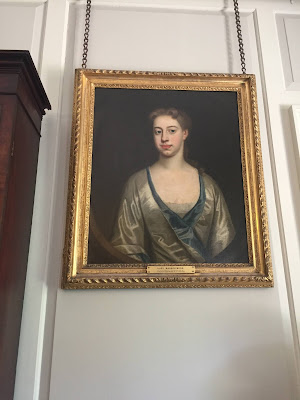 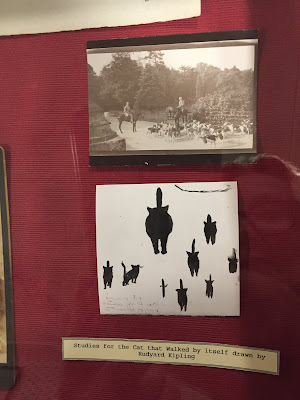 Posted by Blackbird at 13:14 No comments: 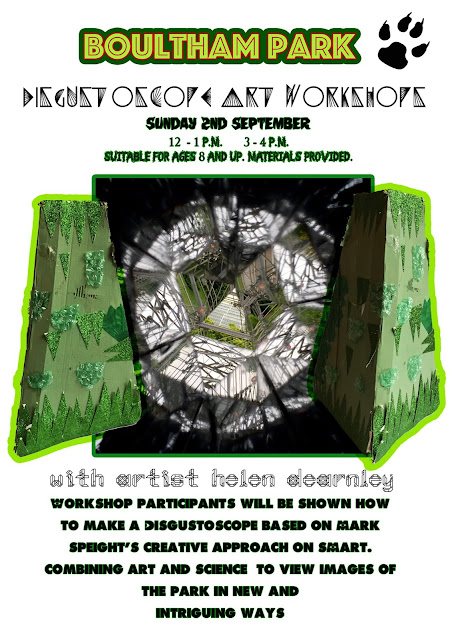 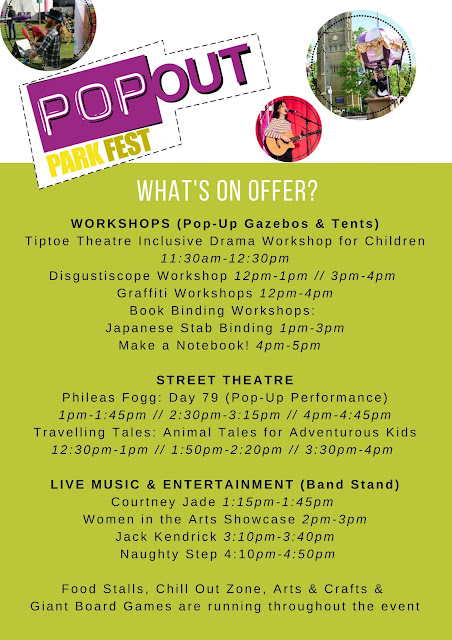 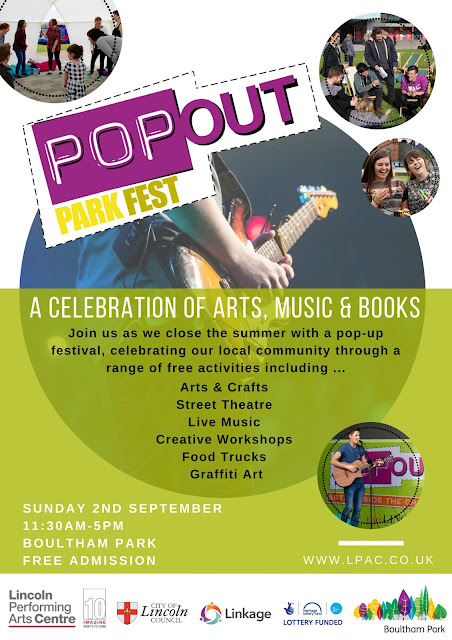 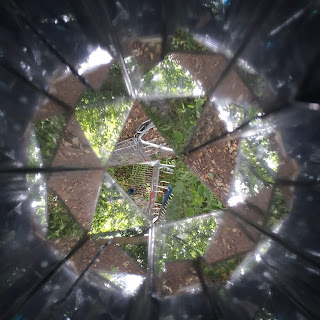 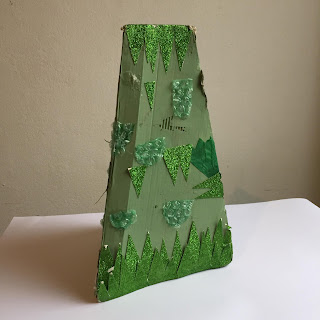 Posted by Blackbird at 08:21 No comments:

Last week was my birthday.
I'm now officially the answer to Life, The Universe and Everything. But according to the arts world, I am irrelevant. Ignored.

The Arts World does not want to know the answer to anything.

I went out for a meal. It had been a busy week doing a non-creative zero hours contract job that doesn't even pay the bills any more, so it was my attempt at some kind of normality. 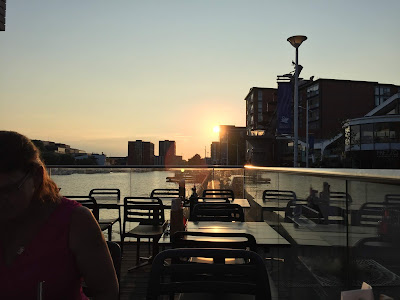 The Water Clock on the Brayford Pool is working again, which was rather nice.

Self care and wellbeing involves being able to eat well, have some respite, and have a nice home. So I buy food from supermarkets, not grovel at food banks, and I do like some flowers to celebrate my birthday. Sunflowers are most apt.

But once my birthday is over, it's back to fighting austerity.

Here is the hated PIP Application Form that I am loath to fill out.
I AM NOT BEING PAID TO DO THIS.
Therefore, I know I am being forced into slavery.
I DO NOT AGREE WITH IT.

We have already applied last year and been rejected, so I expect no less.
This is not doing my mental health any good at all.

Last week, I had a voicemail while I was at work - in my non-arts zero hours contract job - to ask if the appointment could be changed. So I rang to say it could, and I cancelled an appointment with the CAB.

I had two appointments, one had been booked with the CAB, and the only available time they had was on Thursday morning, which is during my work hours.
My son, being the applicant, and suffering from depression, would not be able to get up and go to the CAB office to do this.
When I asked about that, they said I could fill it out on his behalf with his consent.
The welfare team rang back just after I booked this and insisted that they had an appointment available on Monday afternoon. They would send someone to visit.
This seemed like a better option to suit us, so I rang back to say that the change of time was not a problem.

I asked what would happen if his sleep pattern changed again, which it does frequently, and he was not available to fill the form out. I asked if I could get his consent to fill out the form, as with the CAB.
They told me no, he must be present, so I now regret cancelling the appointment with the CAB and I trust neither the CAB nor the welfare team to not screw up the application.

I am obviously not able to do any artwork at the moment, which makes a mockery of my self employment.

I have applied to OPEM for a residency at The Collection for Peace Painting, and I realised that when I applied for the Artist's Flags commission, I made a typo in the email address, so they never got my application.

The bureaucracy of dealing with the welfare team, who are doing everything in their power to obstruct, obtuse and hinder any welfare, is affecting my ability not only to work as an artist, but to apply for work as an artist.

I then have to deal with the bureaucracy of an arts world that refuses to accept my proposals.

I am desperately trying to find a way out of this situation, but at the same time, I'm fighting and losing against the persecution of austerity. Constantly.

You can listen to this Radio Four discussion about what we as Carers have to give up to look after family. c/o Carer's UK.

You can hear how heartbreaking it is for those of us that do not have any other way of supporting family. It's an IMPOSSIBLE decision.
If I knew there was somewhere my son could live, with paid carers to manage his depression, nurses properly qualified to give him the care he needs, like, I don't know, maybe a mental health unit - not an acute ward - he isn't always suicidal - or some form of care home, like the ones dementia patients live in, to make sure their needs are met, but for adults with mental health problems, then that would be all fine and dandy.

The alternative for us was that he could've been homeless, suicidal, or living with an abusive family that constantly told him that we didn't care for him.
So I had NO CHOICE.
But I'm not being paid as if I were a carer working for the local authority - to do the same job that paid carers do for nothing whilst trying to keep a roof over our heads, and pay bills.
Hats off to the guy that was rich enough to be able to care positively without it impacting his lifestyle too much. But the harsh reality for many is that we have no choice and are forced into poverty, and as negative as that seems, it shouldn't be that way!
To say "You do it out of love" - that's great, but please do go and find me a house to live in where there is no mortgage, no rent, no utility bills, the supermarket shop is free, and all I need is love, because I'd really like to live in this place.
Love needs valuing properly.

And I am not working in the arts for his PIP. The arts world is not having a penny of his hard won ESA.

Posted by Blackbird at 02:55 No comments: