It's been a tumultuous last week of the summer holidays. I have tried to have some time off, a break from work, to give myself time off to wait for the outcome of the ACE grant proposal, but have found myself coming up with ideas for other work, and I spent two weeks putting together a Kickstarter project for my graphic novel (which is all documented via my illustration blog).

I wanted to get away, go somewhere, I had a few places in mind, but not a chance of affording even the cheapest travel overseas to anywhere such as Denmark or Amsterdam, both of which were enticing me to go and visit.

Instead, the most I can afford is a visit to my sister's down in Saxmundham. She moved there a while ago, so it's the first time I've been to visit and see her new kittens.
This last week, my eldest son went to his friend's and never came home. He says he wants to move out. Which I'm strongly trying to convince him not to do at this point. If he does, I will lose support for him, and I will have to move to a smaller place. I can't afford to move right now, he would be much better off staying at home for another year - I did try to explain to him that if he does well enough to go to University, and decides to study here, he'd have less costs living at home, as he won't have to pay to live in halls. He can always hang out with his mates there, so he won't miss out.

I'm treating his kamikaze attempt to fly the nest as a brief hangout round his mates, and went to get away for a day or two.

It was a horrible, rainy day, but we went to the beach despite the weather, and to Snape Maltings.


The Scallop, by Suffolk artist Maggie Hambling is dedicated to Benjamin Britten.
It's the perfect accompaniment to the book I read on the train home - "Orkney" by Amy Sackville.
We passed the House In The Clouds
As the fine art and illustration staff at the University of Lincoln move into the all new AAD faculty building on Brayford campus, I feel somewhat lucky to have been able to have come up with the concept for Cloudbusting having been educated at the top of Steep Hill, an experience future freshers will miss out on.

This road sign sculpture immediately caught my eye when we arrived in the car park, but I didn't catch who did it! It reminds me of waiting at the train barrier on Lincoln High St, which is where I would curate it! 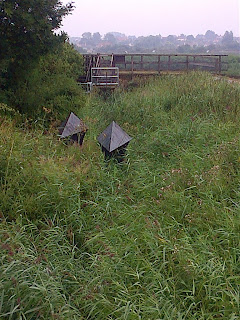 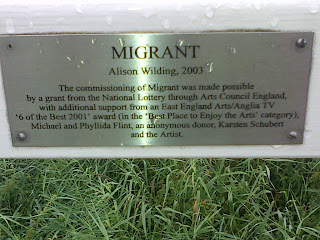 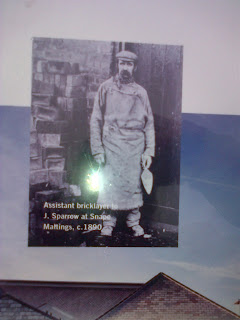 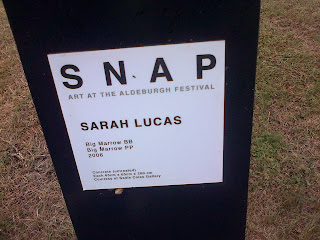 According to Brett, snozcumbers from The BFG. In Sarah Lucas' world that means the BFG had 2..... OMG! Here, you can use the Sewell sampler to construct a critique of this piece. 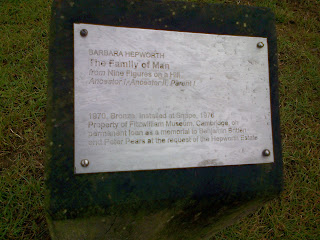 There was a family at this sculpture. A Mum, Dad and some kids. The parents were asking the kids about the materials used, they were clearly educated and trying to teach them something, but the kids were, as kids tend to be, far more interested in poking their heads through every hole, and climbing on it. I photographed it for anyone that might be interested in this sort of thing. To me, it's utterly dull. It's as dull as The Flintstones cartoon if the flintstones had been made in the time it was set, and had to be hewn out of granite for each frame of animation. By the time it'd been made, everyone would've been killed by wild boars or wolves.


This is more like it - the story of Jack Covill-Lowndes having his statue made out of Lego for fundraising for the hospice where his Mum died of cancer, was a story I read in The Metro on the train to Spalding - here's the story from the Skegness standard. I think it should be installed in Skeggy, perhaps at the train station, or on the seafront near the clock tower, where kids can have their photo taken next to it. Actually, he could be waving on the pier! 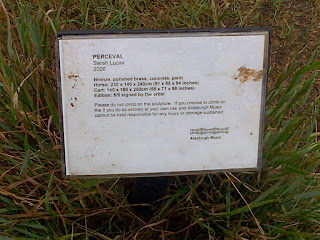 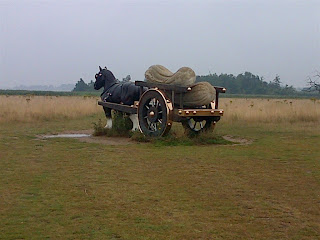 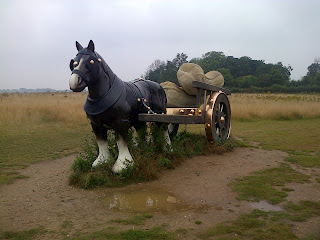 I was drawn to the Sarah Lucas sculpture, it immediately reminds me of The Haywain, but also of Granny's collection of shire horses and carts that she has in her house. I'm guessing this was the original reference, made to resemble an ornament, to a much larger scale. The BFG's mantlepiece.
Here, you can use Sewell Sampler 2, as well as the original above, to critique this piece.
Posted by Blackbird at 06:43 No comments: