Despite my best intentions to follow up my Borges work with illustrations, I stupidly looked at Twitter and spotted an animation award asking for submissions, and found myself inspired to work on that instead. My ability to focus is subverted by the Orange fiasco, which has been ticking away in the background for nearly a year now, but which didn't raise it's ugly head until recently. It's causing a great deal of stress, added to which, with eldest son having embarked upon his G.C.S.E's and the passive stress I'm getting from that means that most of the time I spend convincing myself that the squirly stomach will go away, and that I'm not pregnant!!
Laugh you might, but once I thought I was erroneously putting on weight, went to the doctor's to discover I was 5 months' pregnant. Experience (and stress) makes me slightly paranoid about these things occasionally. Considering I do not currently have a boyfriend, and spend most of my time avoiding the lustful advances of men (!) it isn't feasible I could be anything of the sort.
Needless to say, the good news is that Ofcom are taking customer complaints seriously, and I hope that soon there will be a resolution to this issue, and that I'll receive compensation for the time and stress of dealing with them.


I sent a formal complaint 2 weeks ago, which Orange haven't replied to, yet they continue to send me bills for a service I'm now no longer able to use.
As soon as this is over, I'll be going back to Virgin and will never take out a phone contract with Orange again.


In other news, I'm working towards initiating artist-led projects for the LAN in Empty Shops spaces, and it's looking positive, but will know more next month.
Posted by Blackbird at 06:22 No comments:

I'm unfortunately engaged in a dispute with the corrupt mobile phone company Orange.
In August 2010 I was tricked into a cashback redemption contract via a company called Excell Communications, which went into administration in Dec 2010, and which no longer exists, leaving me with an extortionate contract that Orange refuse to nullify.
I was assured by Excell Communications that I would pay £15 a month, but have in fact had to pay £25 a month and more since the company went into administration. Worse than this, my time is being wasted by having to scan in bills to send to a company called Midland, who have been paying the cashback amounts... until now. What I wasn't aware of, and what wasn't explained to me, was that I have 12 months left of this no longer valid "contract" for which I'm expected to foot the bill to the tune of £62 - £63 per month. I wasn't made aware that the cashback arrangement was only for 12 months.
I obviously don't have that level of income to pay for this, so I have no intention of paying any more money to Orange, and will outline how corrupt their company is to be working with cashback merchants such as Excell Communications.
I've contacted Ofcom, but I've learnt that Ofcom are in cahoots with Orange, in order to make a lot of money causing people to go into debt this way, and doing nothing to help people that have fallen foul of these conmen.
I used to get briefs from Orange during my degree, so I did what any good illustrator does, and illustrated the situation as accurately as possible. 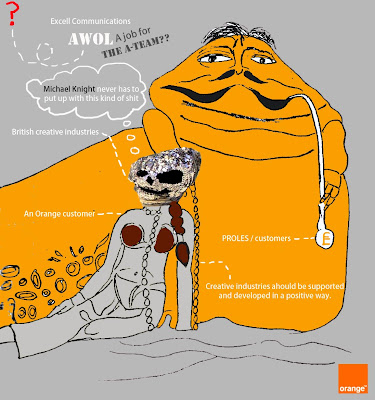 I should point out that Orange have already taken down other people's blogs for speaking the truth about this issue, so if Orange wish to silence me, I will not be bullied into taking down my own blog. If Orange co-operate and the matter is resolved without any more corporate greed or gaslighting, then all vexations will be removed, but until then, I will continue to fight as is my human right to speak the truth.
If Orange pass on my details to a debt collection agency, then this image will be put up for auction on Ebay, where a large proportion of people will see what a greedy company they are.
Posted by Blackbird at 04:20 No comments:

I've decided that the first thing to work on for Borges illustrative work is a book cover illo.
So I wanted to draw elements from his narratives to give an impression of Borges' writings. The Penguin copy I have mainly consists of a 1930s style black and white image of a group of identical men standing with their backs to the viewer, all looking at a white square on a wall.
It does have a nice silvery background for the text at the bottom and the back, but Borges writes about mirrors, time, God, encyclopaedias, paradoxes, it's very Doctor Who, and there needs to be a sense of the futurism and postmodernism of his writing. 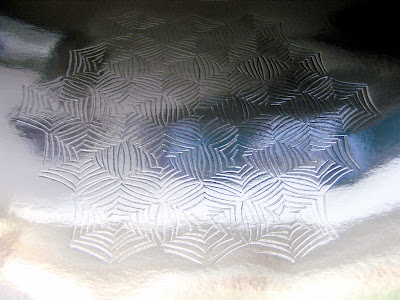 Google "hexagonal labyrinths" and most that come up are actually octagonal.
It took me ages to construct this labyrinth, but it works. There's one true path to the central hexagon, all other paths are false. It isn't like other simple labyrinths, where it's really just one path. The spider's web design seemed obvious; why no one has invented a labyrinth based on that before is odd. Etched into silver card it shares the beauty, delicacy and intricacy of its design, with a slightly space age edge.
Posted by Blackbird at 04:39 No comments: