I had to take a break from the proposed Mail Art piece, so instead I contributed to Emily Speed's Work Makes Work blog here in the hope that some kind of opportunity might come of it.
Nothing much is coming my way lately, and I'm not getting much work done in fact, too busy being given conflicting information and struggling to pay the bills.

I wasted a lot of time recently applying for a job as a gallery assistant at the National Centre for Craft & Design, which was not successful. It stated that "due to the high number of applications we cannot give individual feedback if unsuccessful", so I asked of course, because I'd really like to know why Im not considered for work with all my experience!!
This week I feel trapped in a punitive situation, put in a box with no way of escaping, and things are only going to get worse. I can't see anyone helping me out of this trap.

I am currently struggling with some dire personal family issues that can only be resolved if I am paid for my work as an artist. And I don't have the time or the energy to waste applying for ACE funding, or any jobs or opps that involve lengthy form filling and box ticking. I'm tired of it.

I had hoped to go to the 3D printing workshop at the UoL today, but when I enquired, it was fully booked.
Posted by Blackbird at 05:34 No comments:

I've been toying with this concept for a while, it pops up in the back of my mind, as a follow on from the Mail Art exhibition that I curated back in 2012, and other mail art projects.

It relates to Sophie Calle's "Take Care Of Yourself" and also to the existential theories behind my practice.
It stems from the 2006 film The Lake House, in which there is a magic time travel mail box.
Sandra Bullock's character, Dr. Kate Forster, posts love letters to Keanu Reeves' character, architect Alex Wyler through time.
The Doctor Who fan and Schroedinger fan in me loves the concept, although the film is a version of the Korean film Il Mare, I wanted to recreate this scenario. I'm not entirely sure why.
What intrigues me is that in the original film, there is a radio, but the Anglo version swaps the radio for a copy of Persuasion by Jane Austen, and there's also a reference to Dostoyevsky. I believe this reference is for White Nights.

The other aspect of the film that I wanted to explore was The Lake House itself. A glass house was built on a lake as a set for the film, and was removed once the film was shot. The house itself is impossible. It has a tree growing in the middle of it, even though it was built on stilts in a lake, and the tree is clearly visible growing through the greenhouse-like glass roof, as Alex and Kate exchange letters in the magic mail box. Yet at one point, Alex goes to the attic to find a box - this attic does not exist!! When he's standing on the roof showing his brother how the glass roof opens up, there is no attic! Gaston Bachelard wrote much about attics containing dreams and memories.

In The Lake House these memories are of love. And love is enacted through the Schroedinger's box of the mail box. A letter appears from either Kate or Alex, but neither of them have yet met, as they both exist in different times.

So I decided to source an American style mail box, for participants to write letters of love to the past or to the future.
The white mail boxes are quite hard to source - the one I chose isn't an exact replica, it has slight differences, but it's close enough.


I didn't buy a post to mount it on. The original idea was to mount the mail box on an existing post, but the location where I plan to install this looked unlikely to have a suitable post. With a limited budget, I sourced a cardboard tube, and have painted it to resemble the balustrade on which the Lake House mail box rests. I mounted the mail box onto an old drawer front as a base, and screwed this into the post. I added the remains of a broken bike pump to the base of the post.
I then had to consider how this will be positioned in its location.
I found that digging a trench in the garden and burying the base gave the mail box stability, but the wind was fairly strong that day, and it wasn't long before it blew over.
However, this was mainly because I hadn't packed the soil back in too hard, as I knew it was a test, and I'd need to take it out again.

Inside the mail box are the instructions: 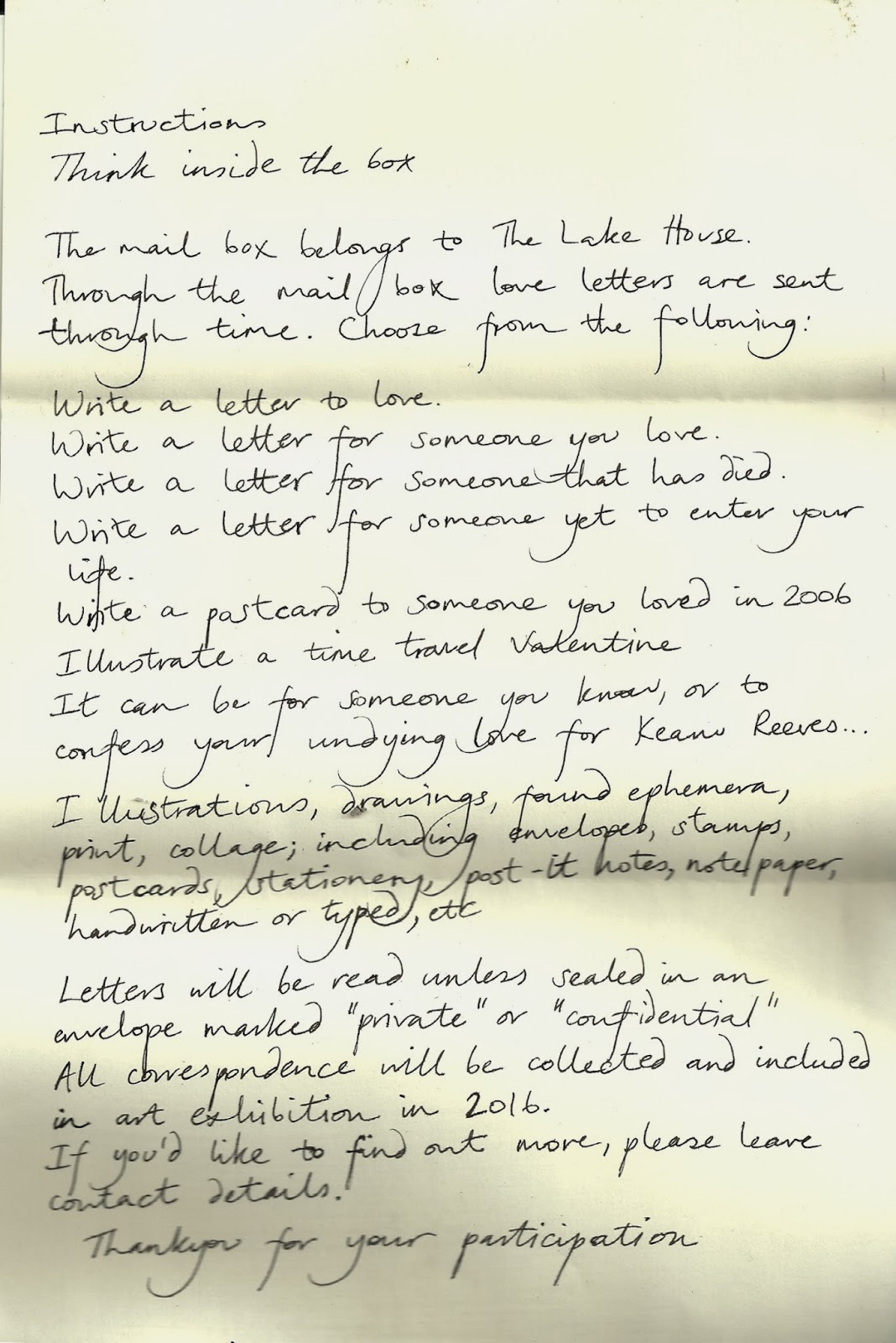 There is also a replica of the first letter that Kate posts, that starts "Dear New Tenant,..."

I then considered positioning the mail box in situ overlooking Delft Pond - how would I transport the mail box to the location?
After some tests and consideration, it was decided to cover it with bin liners, and position it on a bike, to wheel to the location.
This was planned for last weekend, however, the weather turned more windy than I'd have liked, and for various reasons I decided to install it at a later time. The weather was better on Monday, but it's set to be hideous on Wednesday, so I'm hoping it might be Thursday.

There is a part of me that doesn't even know if this will be installed by Valentines Day, and whether after all the preparation it will go ahead.
Posted by Blackbird at 12:10 No comments: