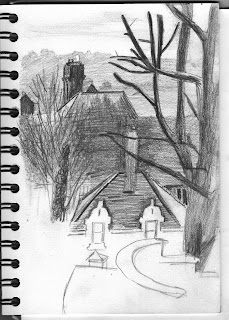 a sketch of the "real world" outside the studio window.... 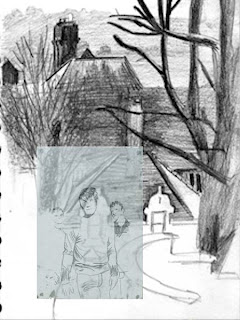 I had a brief tutorial with Medina, who seemed to think of it as being an installation, which I see it becoming actually. However, she also suggested something to do with mapping thoughts, pins and string, and when I say I don't want my work to be giving out signals of obsessiveness, people usually mention Isaac's loft in Heroes, with all that string and newspaper cuttings etc, so if it starts turning out like that I'm in trouble....!

No, I was writing in my dissertation a reference to the window, or "mirror" in Take On Me" where the girl has already gone into the comic book realm, but still appears as real.... 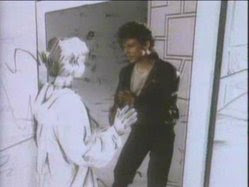 in the precession of the simulacrum, she represents the viewer, who is also drawn into that world... this was with reference to Velazquez' Las Meninas, that the painting is viewed from the perspective of the subjects, the king and queen, who appear as reflections in a mirror. I was thinking of the frame in the Take On Me video that they dance in front of as being like that mirror.... so I had this idea of building that frame in my studio, so that whoever enters the space immediately becomes involved in the video; the unreal becomes real. I also came across a drawing of the view outside the studio window, that I did and never used.
I think that would be excellent juxtaposed with the other work, because in that image the real world outside the studio becomes part of this comic book world.

I am in the process of preparing everything for assessment, and as such I will not create any more work, unless I have time to draw some more aspects of the "real" world to add to that drawing... but I am considering how it will be presented in the space.
Posted by Blackbird at 11:29 No comments:

Before I didn't upload all of my work... 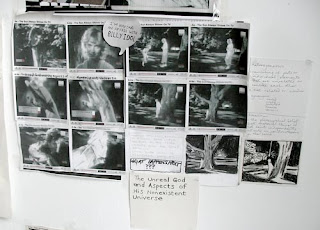 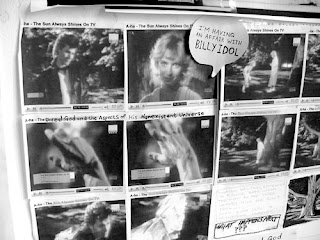 I've been trying to read The Order Of Things - Michel Foucault, but have been distracted by Mr. Merzbau himself causing me an unnecessary amount of anguish.
Yesterday, Jamie Shovlin very kindly came to tell us about his work, which had some very striking resemblances to my practice in many strange ways ;-)
Here is some info about him:
http://entertainment.timesonline.co.uk/tol/arts_and_entertainment/visual_arts/article1955829.ece
http://www.tate.org.uk/britain/exhibitions/artnow/jamieshovlin/default.shtm

He made me think of Gerard Byrne and Foucault, which is probably not a good thing to do simultaneously....

So, the images above are of the beginning of The Sun Always Shines On TV video, which concluded the narrative from Take On Me, culminating in the moment when Morten Harket turns back into a comic book character, and disappears into his comic book world.
I was considering continuing the story where it left off (and turned into a Cathedral full of mannequins!) - to continue the comic book imagery. 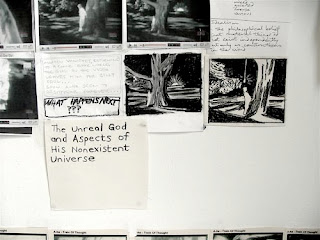 Shovlin's made up German rock band is probably about as amusing as this idea.
However, I'm not sure at this stage whether to completely make something up, to include real events that happened to A-ha / Morten Harket after Take On Me, or to do what John suggested and edit the actual Take On Me video itself, adding my own elements to it. It has been suggested to me *NOTE* THIS WASN'T MY IDEA! that I edit myself into the video.
I did that FOR A JOKE when I bought an original promo version of the Take On Me single from ebay, which has the actual comic book in it (I've never seen another one since, so it was lucky I got that.)
Yeah, I was messing about, taking the p*** by editing myself into the comic but I doubt I'd do that seriously (even though Mags gave it the thumbs up!)

Having said that, A-ha themselves edited themselves into Morten Skallerud's "A Year Along An Abandoned Road" for Lifelines.... and I've always wanted to go to Norway.... Shovlin might be on to something with his fake American sojourn.....


I have been shooing this idea away like an annoying fly; that I could add what I was doing at the same time, adding onto the end of the Take On Me video a reconstruction of my actual childhood around the age of 10 as a "Meanwhile"...
This was when I decided I wanted to be an artist. Then later this parallel narrative would culminate in the actual Take On Me promo single that Pal signed for me - that was when my world and A-ha's world collided...

I think I need to take a rolled up newspaper to that idea as well. It isn't funny enough.

It has been suggested that because I've stuck pictures to the wall, it looks like an "obsession".
It's an art studio.... that's what artists do.
They're not staying like that, they're probably going to become part of a comic book, but anyway here are some thoughts on that notion: