I've not blogged for a while, work for Alice has been sidetracked by other things, admin for the LAN, an A-ha gig / exhibition in November, the LAN Christmas Market, then a whole series of unfortunate events occurred. Some financial difficulties were only compounded by the sudden death of my father just before Christmas 2009. However the exhibition is ongoing and is now picking up momentum, I have work in sketchbook, and need to start the animation now my ideas have finalised into something definitive. The A-ha gig in November provided some intriguing research material. It took place on Nov 4th, the same date as when Through The Looking Glass is set.
Having read "Alice In Wonderland" on the tube and worked in my sketchbook on the journey to London, editing rabbits into the Take On me video, this became the central concept, cemented by the fact that 2010 is A-ha's final tour.
I also came across a rabbit sculpture near The Mall galleries, which I have since discovered was by Barry Flanagan. In particular, his "Mirror Nijinsky" sculptures seemed to me to evoke the White Rabbit in The Matrix, and also a metaphor for Tweedledum and Tweedledee. 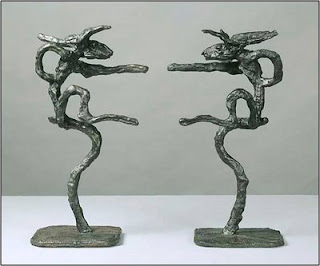 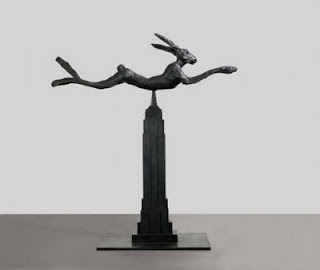 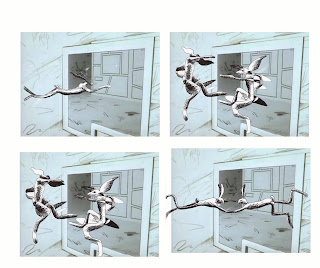 The animation is constructed of four frames. Each frame will have a different simple animation in, with re-appropriated imagery from the Take On Me video. I'm waiting to find out whether I can access a projector to display the animation in the cinema space. I plan to make a 3D "set" version of a scene from the animation to exhibit. For this, I'm interested in the scene when Morten's hand appears out of the comic and the girl is drawn into the comic world - that relates directly to Alice In Wonderland, when she goes down the rabbit hole.
I do plan to make these available as DVDs and upload onto Youtube, but ideally want to project the animation onto the 3D "set" or onto the wall.
Each animation sequence will be very simple animation - for one sequence, it will be the two rabbits in a "bullet time" motion, where the camera pans around the TOM frames.
Posted by Blackbird at 14:34 1 comment: