So impoverished by austerity, fighting for my son to get an income / battling Universal Credit, back in March, I took part in an experiment.

This was in the Sleep Lab at the University, where I had wires glued to my head to measure the electrical signals of my brain whilst sleeping.
Below are some of the readings of my sleeping brain activity:

These look like sound waves, so I had the obvious question of what they would sound like. As far as I know, no one else has investigated this.
The Beatles' I'm Only Sleeping

What I liked particularly was that I was paid in £50 Amazon vouchers, so I could buy my nephews birthday presents without going into my overdraft.
Being paid to sleep is also a very good idea for artists, and carers, not being starved to death.
It's obviously a lucrative concept, or Jacob Rees Mogg wouldn't be doing it in the House Of Commons...
It's subversive. People hate it, because they buy into the notion that leisure has no value, that work has value, but in fact, work has no value, so it needs subverting.
Culture is a lounge.
Culture is a not gate. 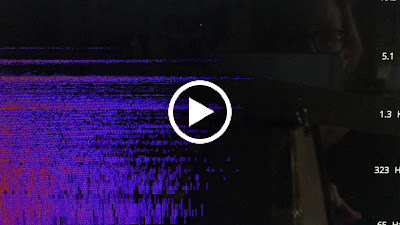 Here is the first track "Dreamfall" from the new album Lost Dreams, by Blackbird
This video probably doesn't even work.


Album artwork is a colourised Inktober 2018 illustration to reflect the very sci-fi sound created by my brain.
The reverse is of an odyssey to Europa, with a sonic aurora taken from running the sound sample through an online spectrograph.
Track listing:

Posted by Blackbird at 05:18 No comments: