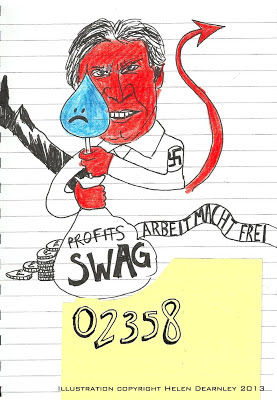 Following the success of the previous Orange mobile phone illustration - it led to a paid commission for Mobile News, and through persistence, Orange have stopped trying to harass me for money I do not owe, as they know that if they do, I will win any court case, and would have to pay me more.

This illustration was created as a commission for British Gas, who asked me to do a meter reading. I've invoiced them. Something tells me they won't pay.
Posted by Blackbird at 15:30 No comments:

2012 seemed to be a year wasted applying for a myriad of art projects that obviously were not worthy enough of my considerable time and talent. Everyone seems to be holding back, especially when it comes to actually funding artists to create work, but 2013 already feels that this is the year when people are starting to let go of whatever it is that seems to be making them unable to do things.
I can just tell that this year is going to be so much better than last year. You'd think that it couldn't be much better than the Olympics, but the Olympics was only best for a few people, not everyone. The Olympics was Smaug. This year will be much better for everyone. This year will be the year that all the dwarves gather at Bilbo's house and plan to take back what's rightfully theirs. Metaphorically speaking, of course.

I hope that a possible paid position running the LAN will become a salaried role some time sooner rather than later, as quite frankly it's shameful that I'm not earning enough for the work I do.
I hope that no more of my time will be wasted applying for funding that isn't successful / other people's projects that are funded, but have no intention of accepting my proposals / no more money wasted investing in anything that doesn't pay me back at least twofold for my efforts - time to cut my losses.

Looking forward to more support and better support, such as my recent all-expenses paid trip to Oslo - definitely the best thing that happened in 2012, along with my comic auctioned in Brighton, with work by other high profile artists alongside, a published commissioned illustration exhibited in The National Library of Norway. And the recent Empty Shops projects that have provided not only myself, but other artists space to experiment and exhibit, is another successful achievement for last year. 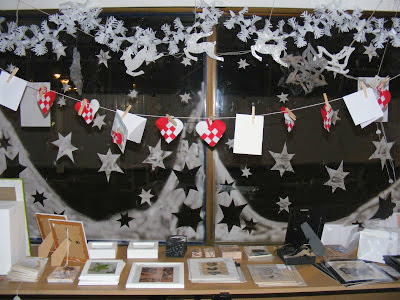 But quite frankly, it still isn't good enough. I am NOT going to work for nothing, I'm STILL not earning the equivalent of my artists' day rate, so PAY ME!!

Posted by Blackbird at 09:21 No comments: