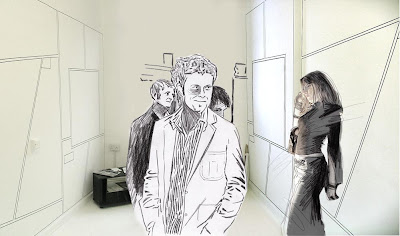 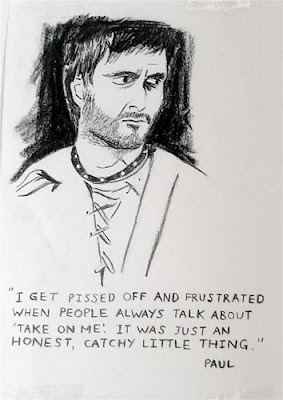 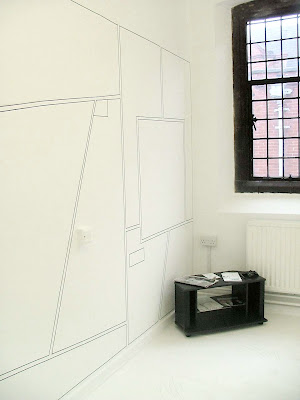 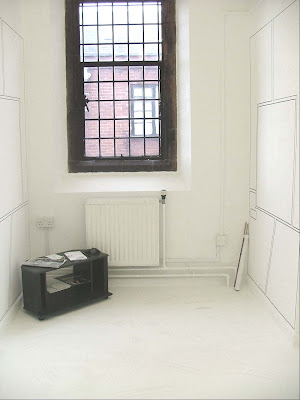 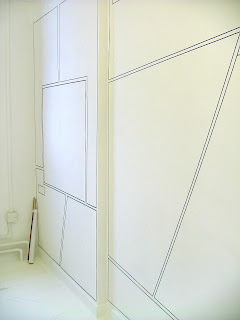 After spending most of last week setting up and preparing my Illustration Degree Show ready for assessment yesterday, last Friday was the preview of my Fine Art Degree Show, The Unreal God And Aspects of His Non-Existent Universe, as part of the University of Lincoln Degree Show thisisit08.
I made a comic style comments book to go in it, and left to get ready and pick my children up from school, and as such I was running slightly late to meet the curator. But nevertheless, she had some positive comments to make about my installation, especially how it worked juxtaposed next to my colleagues' installation in the adjacent room.
I received positive comments from people who actually went in and "read" the comic itself, and all my worries that people wouldn't be able to see it the way I intended have been allayed by the response I've received so far!
So I will share some pictures here, and then I will share my Illustration Show as well - I have pictures of how it is currently, awaiting assessment. 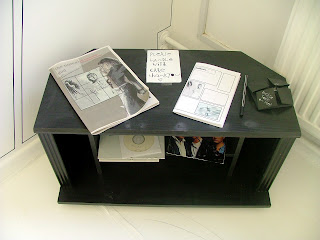 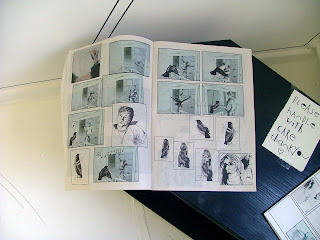 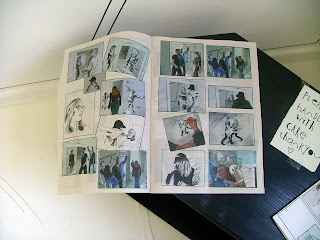 Posted by Blackbird at 11:45 No comments:

[8 May 2008]
I have finally printed the actual comic! I'm so happy to have that finished! I was going to print several copies, but now time is running out I'm just glad to have one finished comic to go in the installation to make it complete!

Everything else is back on track, but I still have a lot to do and today I had to clear out my Illustration studio. It feels sad to know I'll be leaving soon, but at the same time I'm getting quite excited and will be glad to graduate.
Just to backtrack a bit here's what else I've been up to: 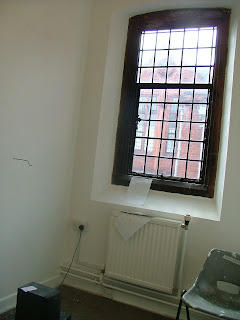 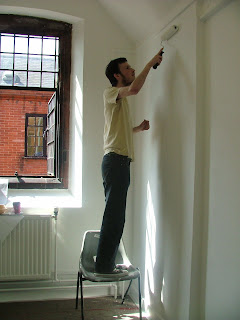 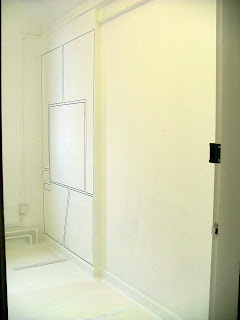 [2 May 2008]
I've finally started to set up my space now, although this was hindered slightly by the fact that Channel Four were filming an advert for the University in the gallery for a while, and the place was awash with media people and equipment!
Now that I don't seem to have any other unnecessary distractions I feel quite excited at the prospect of my show - positive comments from people have helped!
I wasted a day attempting to print my comic onto newsprint through a laserjet printer and have since considered other options, but at least my comic is finished ready for printing, so that's satisfying!
Yesterday I foolishly thought that helping to self publish the Illustration catalogue would only take up a small amount of time.... but I have finished my dolls (whoops - shouldn't mention illustration work here!!) and am addicted to photoshopping a storyboard for a potential Brothers Quay style animation.
The dolls I have been making are to illustrate Black Jack Davey, a folk rock song by Steeleye Span... that's another story, but once I've set up my Fine Art show, I will also be exhibiting my Illustration work a week later!!
As a joint honours student I had the choice to exhibit at one show or the other, or both; the other joint students are doing both shows as well, so we're in it together. I know how Clark Kent feels now......!
The bad news is that A-ha themselves will not be able to attend my Degree Show, as they will be busy preparing for a gig at the Royal Albert Hall - I sent an invite to Morten's management via Facebook, but they declined. I'm sure they would've accepted if it wasn't for such bad timing ;-) 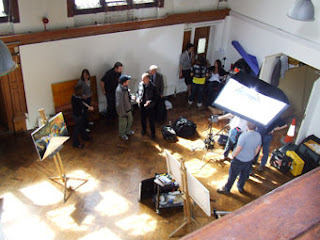 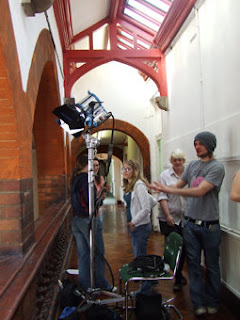 [25 April 2008]
I'm getting really stressed out about the space for my installation, as I had tried to plan it so it would be straightforward, but the disappointment of having not secured the space I ideally had in mind is causing far more potential problems than I had hoped for.
I've been thinking about how to print my comic book and have decided that screen printing it is going to be too much kerfuffle and it'll be easier to just print it on newsprint through the printer in the faculty of Illustration.
I've been working hard to get my Illustration work finished so that I can concentrate on setting up my Fine Art show. Being a joint honours student has its benefits and its drawbacks.
But most of my drawbacks last week were caused by my boiler packing in.
I wasted so much time waiting for the gas man to come and fix it, plus the stress of not having heating or hot water for myself and my children for a whole week, that I haven't even begun to think about the logistics of building a room for my installation, so the repercussions of that are manifold.

[3 April 2008]
Today the spaces we have been allocated for the degree show have been announced on the noticeboard. I haven't succeeded in securing the space I ideally wanted, and have spent some time today trying to figure out how I can set up my installation in a room that will require a lot more work.... hmph!
I've collected my sketchbook so I can carry on with my comic book work, and I've been trying to figure out the best option for my webcast, and it's all very slow, and not only that, I had to go to the local gallery to go and watch some performance art by some colleagues, which was all very interesting, but I'd rather hide away and get on with work. I'm avoiding University tomorrow for this reason, that every time I go there, there is some distraction, however I'll have to go out in the afternoon to avoid the disturbances of the gas man.
I went to see my son play in the school band this evening. I rather enjoyed it actually, made a nice change, as I generally don't have a social life anymore....!
Posted by Blackbird at 14:58 No comments: