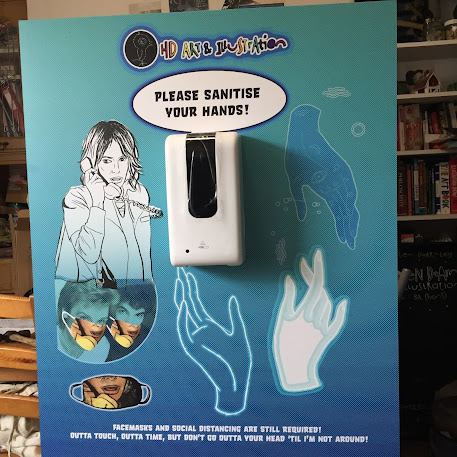 Part of the Business Revival Grant was for a sanitisation station, so last week, I spent some time designing the bespoke branding for this. The artwork template I was sent originally was wrong, which meant that some additional tinkering meant that now it has added Hall & Oates to remind everyone to continue to safeguard vulnerable people during face to face workshops and events. 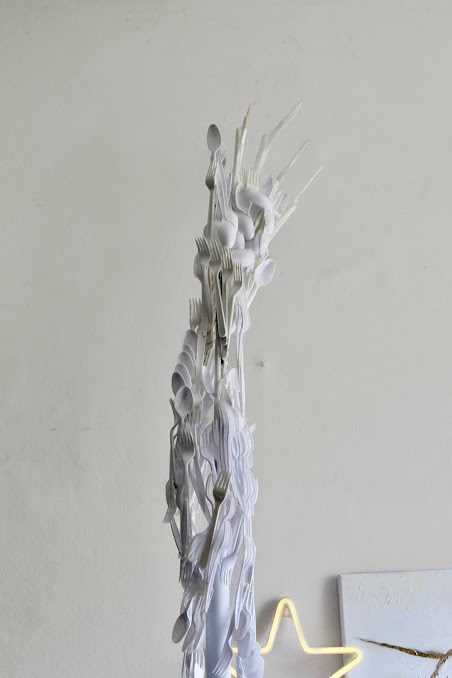 This sculptural maquette is entitled The Best Thing.
The Best Thing is a nod to the phrase "The best thing since sliced bread", as food banks clearly are NOT, despite the toxic positivity that surrounds them.
Plastic forks, spoons, knives and kintsugi.
The plastic cutlery was donated material just sitting around in my studio, as thoughts have turned to Marcus Rashford and food banks, and my determined avoidance of the indignity of austerity. 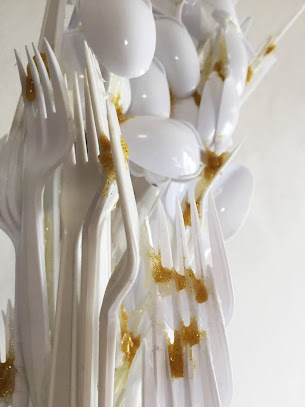 The Best Thing - kintsugi detail
The Nobel Peace Center are currently hosting discussions about #fixthefood food and peace, and as a single parent, my concerns are for other single parents currently struggling through the pandemic and the Free School Meals scandal. 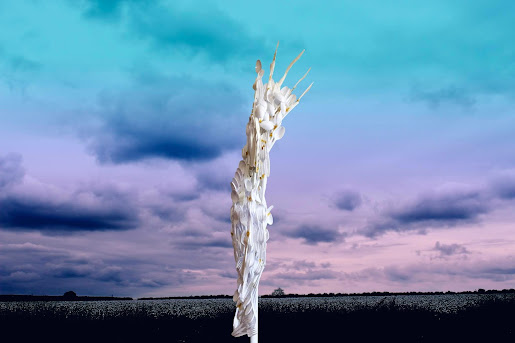 It's so good to have Photoshop back that I've been digitally editing photos taken with my new camera. Here is The Best Thing juxtaposed with a field of white poppies. 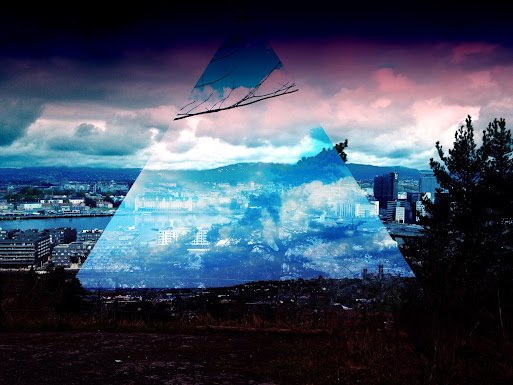 Following earlier research about Imagine, and John And Yoko, my thoughts remained fixed on the way the Imagine album cover was created. The image of clouds is not a photo, as I always assumed, but a painting that John And Yoko had at Tittenhurst.
My lockdown walks have taken me along the Viking Way at the top of South Common, which overlooks the city in a very similar view to that of Ekebergparken in Oslo. So if I want to imagine being back in Oslo, I go up there and imagine The Best Thing is on display amongst the Damien Hirst and Sarah Lucas sculptures.
I have recreated the double exposure style of the Imagine album cover, to place the same view from The Viking Way with my original photo from Ekebergparken. 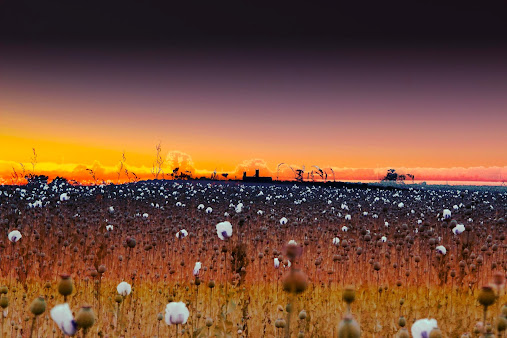 This sunset image juxtaposes the field of white poppies with a view of Lincoln Cathedral from South Common.
White poppies are grown in Lincolnshire fields during June to harvest the seedheads for the pharmaceutical industry.
For the horticultural and botanical out there, it's Papaver Somniferum.
White poppies are obviously symbolic of peace.
Of course, a similar image was sent to The Lincolnite for their Picture Of The Week, but it was grifted from this, not mine. I will forever have my work copied by grifters in Lincoln, who will always claim all the glory for themselves.
Posted by Blackbird at 10:19 No comments: