I finally went in on Friday to have a short tutorial for After Effects, so that I know how to put the animation together in different software to what I'm used to.
It's much better being able to use the University imacs than my old mac that won't do anything that I want it to!
And the animation is fairly straightforward (fingers crossed!) I've just been busy organising all the files and checking everything.

I'm going away over Easter (shh! Don't tell the kids!) - a free holiday to the Isle Of Wight courtesy The Young Victoria to visit Albert Cottage Hotel and Osbourne House for a real royal treat! I've been looking forward to this since January, and it'll be good to go and see whether Queen Victoria really was a non-prude as we're now being told. "With all these nudes around, she must've been fairly confident about her body" I seem to remember an ad saying. No more than say, Prince Albert I'd guess....
Do men suddenly need empowerment projected onto them the minute they step inside the Cistine Chapel, with all those male nudes around? Somehow I don't think so. But there is a stupid myth around that the Victorians were "prudes". Usually propagated by the sex industry for no good reason at all. Obviously, The Young Victoria challenges that notion, as it should.

For Mother's Day, Brett contributed some pocket money towards Natasha Walters "Living Dolls: The Return Of Sexism", so feminist issues have been on my mind again. Not that this will be addressed overtly in my work.

LAN members are wishing to hold a small exhibition at The Terrace upon my return. I really don't have time to organise this myself, as it's too short notice, and I have enough to do. So I'm leaving it up to them to organise.
Posted by Blackbird at 12:09 3 comments:

We were all preparing for the upcoming exhibition, and I was panicking because I hadn't got any where near the animation studio to create the actual animation, and we only had a couple of weeks left to create work. So I booked youngest son into Kids Club for half term, but couldn't get in to do any work because I didn't receive any reply from the animation dept...
then son was ill.
Also, this didn't bother me as much as the fact that the Odeon decided they weren't going to show Alice In Wonderland due to a dispute with Disney over the DVD release.
So the exhibition, and subsequently my modus operandi for working, were all ruined. I sank into despair.
Then I had a phonecall to say that Alice In Wonderland was on again, but by then I was utterly fed up and through discussions with LAN colleagues, they all agreed that they weren't happy with the way Odeon handled this.
But they were keen to continue to exhibit the work they've made. So we're planning a new Alice In Wonderland exhibition, with Lincoln Central Library booked for May and potential to exhibit elsewhere.
This has given me time to re-apply for a new ACE grant, and I don't mind the extra time this allows to work on the animation.
I hope to get in tomorrow to work out times to go in and start creating this from next week. 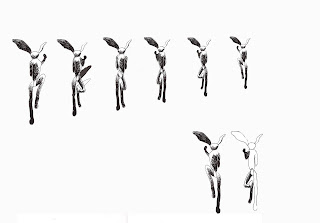 Here is what Jean Baudrillard has to say about Disneyland:

a simulation of the third order:

"Disneyland exists in order to hide that it is the "real" country, all of "real" America that is Disneyland.
.... Disneyland is presented as imaginary in order to make us believe that the rest is real, whereas all of Los Angeles and the America that surrounds it are no longer real, but belong to the hyperreal order of the simulation."

"The imaginary of Disneyland is neither true or false, it is a deterrence machine set up in order to make us believe that adults are elsewhere, in the "real" world, and to conceal the fact that true childishness is everywhere - that it is the adults themselves who come here to act the child in order to foster illusions as to their real childishness."

"Disneyland: a space of the regeneration of the imaginary as waste-treatment plants are elsewhere, and even here.
Everywhere today one must recycle waste, and the dreams, the phantasms, the historical, the fairylike, legendary imaginary of children and adults is a waste product, the first great toxic excrement of a hyperreal civilisation."

Excerpts from Simulacra And Simulations
Posted by Blackbird at 13:46 2 comments: