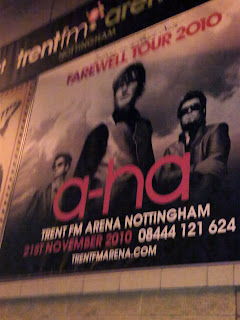 I successfully exhibited some work in Nottingham as part of the British Art Show 2010, at Notts Trent Arena, a situationist and existential exhibition of a banner at A-ha's last ever farewell gig in Nottingham went very well indeed! 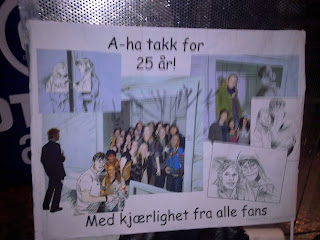 Not only was it appreciated by Magne (well, why wouldn't it!) but it was relayed on screen during "Hunting High And Low" and therefore visible to the entire auditorium. You can see this briefly during this footage:

The banner reads "A-ha thankyou for 25 years, with love from all the fans" i Norsk, and it brings my work full circle, from the day back in Liverpool 2006, when I first exhibited a banner for my 30th birthday wish, which was really to meet Morten - well, a couple of days after the Nottingham exhibition in Sheffield, 2010, that wish finally came true...... after existing in A-ha's comic book world for 4 years, the moment finally arrived when Morten became very real, with suitably Scandinavian weather especially for him! 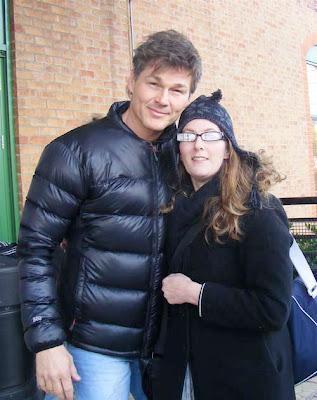 I feel very very lucky, jammy and honoured to have finally stalked the poor man to death (!) but if I'd caught the train home and missed him, I would've missed my last chance to have this photo taken for the most existential illustration ever. 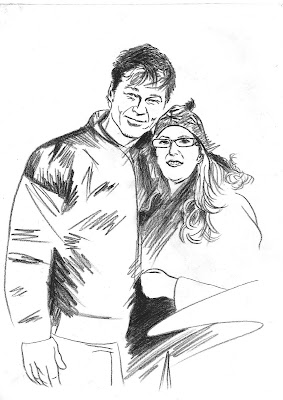 Illustration copyright the artist 2010
Morten is now the proud owner of a copy of my original comic, created for my degree show 2008, based on Take On Me and entitled "The Unreal God And Aspects Of His Non-Existent Universe" it is available to view online here: http://takeonmevshelendblackbird.blogspot.com/
Posted by Blackbird at 04:40