During the workshops at Priory Witham Academy back in December, I became interested in Bana Alabed, and her tweets from besieged Aleppo, and at that time, she was tweeting that Aleppo was being bombed, her house had been bombed, and they were seeking refuge.
So I wanted to paint Bana; here, I have looked at images from her twitter feed, I particularly liked the image of her making a heart with her hands, and looking happy after she was escorted to safety, and is safe in Turkey with her mother.

Behind her happy self, is the tweet from the time of the bombings, where she's covered in dust, looks tired and weary, and tweets that she has seen death.
I included a printout of another tweet with an image of her house bombed to rubble, where she'd recently received a copy of Harry Potter to read from J.K. Rowling.
The tweet is linked from a website that seems to think Bana's twitter is a fake account and is child exploitation.
I have another image of a faked injured child that is a very interesting image to consider working with. 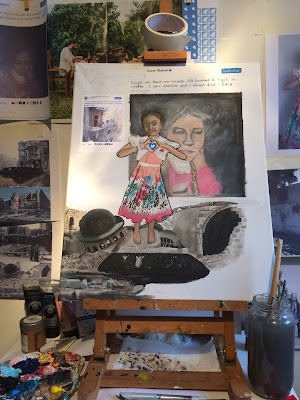 The image cropped out her feet, so although I imagine she is probably wearing trainers and socks, I have painted her with bare feet.
Her shoes will be at the bottom, along with some susuwatari, later on.

The images of Aleppo in ruins from which Bana appears to rise out of, like a child from an M83 video, or a character from Stranger Things, are a composite image. The upturned tank has been painted into another scene, and the rubble will become populated by susuwatari, which can only be seen by children, and the dome from a mosque or other building will become a dovecote.

In my research, I've been thinking a lot about the painting that Archie conceived of - with words of peace in a tree, and I thought he could make the words into leaves, but I've since realised that he wanted them to go on the trunk, like when lovers carve names into tree trunks.
I went to the park, and couldn't find a single tree with a carving in the trunk, but I did have some old birch bark in my studio that I'd collected, so I made a peace heart. 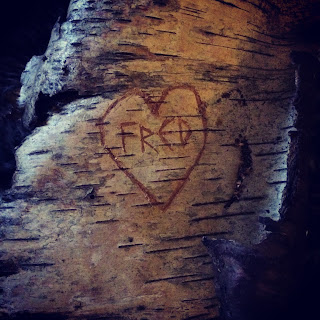 Concepts are forming about how I can equate Peace Painting with my own practice and my own research.
I've been sketching flocks of doves, so these will become another work.

On Valentines Day, this murmuration of starlings flew over my house, so a flock of white doves is a concept for another peace painting. 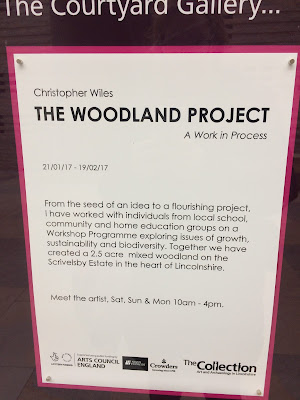 In the courtyard gallery, I spoke to Christopher Wiles about a similar project he's doing. 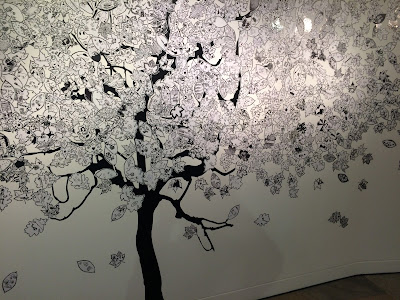 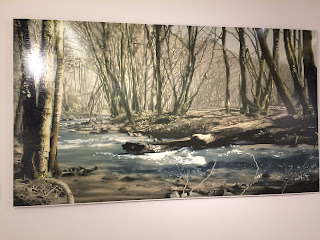 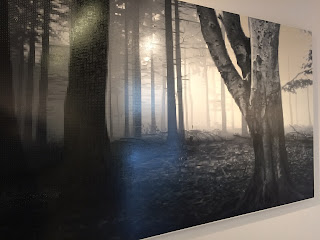